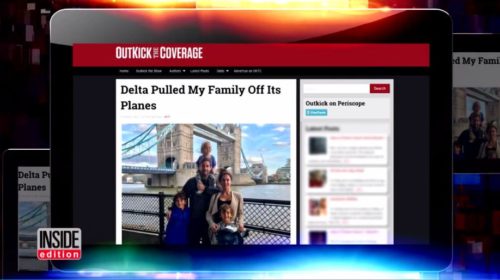 ​​One father is saying his family was pulled from a Delta flight because his young son had head lice.Lara Travis noticed her son, Lincoln, 6, was itchy on a recent flight from Paris to Minneapolis. She discovered that the child had somehow picked up a case of head lice.

His dad, Fox Sports analyst Clay Travis, says flight attendants freaked out when they caught wind of the situation. “Zero indication of [lice] at all until halfway across the Atlantic Ocean and he suddenly started itching hair,” he told Inside Edition. “My wife went over to him and said, ‘Why are you so itchy?’ At that point in time, flight attendants gathered around and asked my wife, ‘Does he have lice?'”

The Travis family had a connecting flight to catch once they landed in Minneapolis before they could get home to Nashville. While they were standing in line at customs, a Delta flight attendant tracked them down. “She said, ‘We’re going to conduct an exam of your kid here.’ Hundreds of people standing around. I said, ‘I don’t want my kid to have a medical exam.’ She said, ‘If you don’t allow us to do this you can’t fly on Delta Airlines,'” he claimed.
​
The airline said Lincoln had to receive lice treatment before he could get on another Delta plane.
Clay Travis wrote about it on his website, Out Kick the Coverage, in a post entitled, “Delta Pulled My Family Off Its Planes” sparking a big debate in the process.

How do you feel about this incident? We are trying to understand how head lice is dealt with in society to see where we can help educate people further on misconceptions.

We'll bring our mobile lice service to your home, or visit one of our discreet lice clinics in your area.

Talk To The Guru